Woodpeckers are a unique type of bird that is common throughout the world, with the exception of Australia, Madagascar, New Zealand, and Antarctica, and are known for their signature habit of tapping or drumming on trees. Over 180 different species of woodpecker exist worldwide, with the downy woodpecker being the most common species sighted in North America. They feature small, stub-like bills, white breasts, and black wings, with the male of the species also having an iconic red patch on the back of their heads.

Few woodpecker species are migratory, with the rest instead tending to stay in the same place their whole lives, almost all of which is spent in trees. They are experts at living amongst trees with their unique zygodactyl feet, which have two sets of toes which point forward and back, and sharp claws, that lets them scale trees vertically. Whilst some woodpeckers eat fruit, seeds, or nuts, their primary food source is insects such as beetles, ants, and caterpillars. 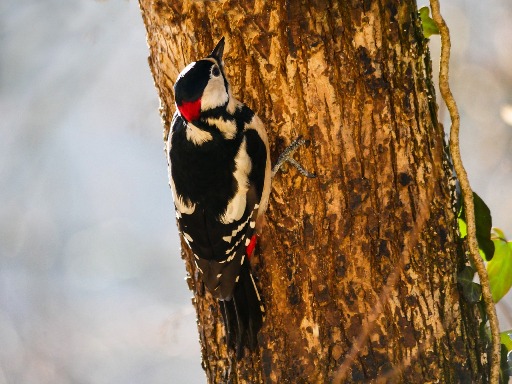 They listen for the sound of insects inside the wood of trees and then tap at it to create small holes through which they use their long, barbed tongues of up to 4 inches to extract them. Additionally, some species, like sapsuckers, feed off of the sap on certain trees. But woodpeckers also tap wood for a number of other reasons. They are solitary creatures, often traveling alone or at most in a pair, and unlike many birds, they do not have their own unique vocal songs, although they are able to chirp like normal. Instead, woodpeckers rely on the sound of drumming at hollow objects like tree stumps to produce loud echoes. To withstand the constant pecking, woodpeckers have reinforced skulls that spreads the impact force and their brains are cushioned.

This is used to communicate a number of things, such as the marking of territory, attracting a mate, or to generally make their presence known to other woodpeckers. Woodpeckers also use this skill in their nesting process, excavating cavities in trunks or branches which can take around a month to complete. However, woodpeckers are not the only species that nest in cavities, so they often have to compete, sometimes aggressively, for space from competitors.

When they hatch, the eggs are white because they do not need to be camouflaged, and the bright color helps the parents see in the dark light of the cavity. Females can lay around 4 to 5 eggs at a time, with each parent taking turns to incubate the eggs. Incubation takes around 2 weeks, and then another 2 weeks to a month before the chicks are capable of leaving the nest.