When you encounter pests on your property, it can be tempting to react instantly and use whichever method is likely to get rid of them the quickest. However, you need to make sure that you consider the ramifications of each killing method before you take action. 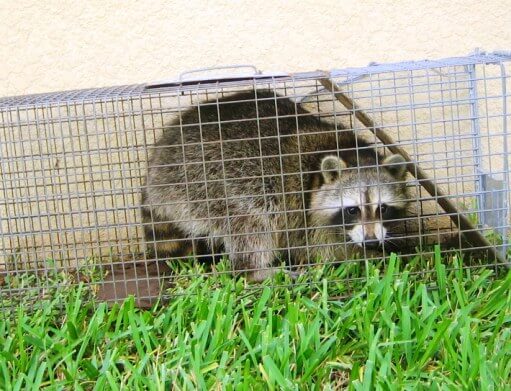 Firstly, before you set to work getting rid of these distinctly crafty characters, you need to consider where they are coming from and why they are taking an interest in the first place.

There’s very little point in getting rid of raccoons as they arrive, without removing whatever it is that’s attracting them. Unless of course, you’re training to be a pest removal expert, in which case go right ahead.

Raccoons are very smart and very agile, but the prevention methods are still similar to that of most rodents. The first factor to address is of course your garbage cans. If they’re open or even covered loosely it’s a banquet for a raccoon and you’ll spend the rest of your life in a constant battle of Whack-a-Mole. Strap lids down or, even better, store the containers in a covered compartment. Don’t leave pet food out, and be vigilant in cleaning up anything edible such as dropped seeds from bird feeders and fresh food. If you do have a pond, put a mesh over it to stop any sneaky midnight fishing sessions, and make sure there are no convenient hidey holes.

Before choosing the right method, closely inspect the rules in your area. There are regulations governing the poisoning, hunting, and trapping of wildlife, so before you commit to anything, do your research.

Poisoning: This is the first option for a lot of people, but it’s by far the most problematic. Firstly, and most importantly, it is unnecessarily cruel. Poisoning an animal does not guarantee a quick death, in fact, it essentially promises the opposite.
This presents both an ethical and practical dilemma, in that the raccoon will suffer immensely as it crawls away to die, and you won’t be able to predict where the body will eventually end up. It’s possible that by the time you find the carcass, it will have actually attracted many more animals than you had before.
Poison is indiscriminate, so you’re just as likely to poison harmless animals or even wandering pets, as well as the added possibility of introducing harmful toxins into the food chain, once the raccoon’s body is inevitably targeted by other scavenging carnivores.

Shooting: While it is indeed more direct than poison and does not possess the same far-reaching consequences, the use of a rifle or other firearm to kill pests is heavily restricted. You must check first whether it’s legal to shoot raccoons in your area, and if it is you may need a further permit. Even if you have all the proper credentials and the legal go-ahead, shooting a loose raccoon is difficult due to their small heads and agile nature. If you plan to use a firearm to dispatch a raccoon, consider using it in conjunction with a live trap for an easy and painless kill.

Traps: Traps that are suitable for a raccoon can either be lethal or non-lethal. If you plan to kill nuisance raccoon using a trap, make sure to make it as quick as possible. Lethal traps such as grip traps are a more humane way to kill nuisance raccoon, as they clamp quickly down onto the spine to kill it instantly.
Traps such as this should be favoured over more drawn out methods. Many people choose to use a live trap and then submerge the cage in water to drown the animal, which is just as cruel as poison.

Live to trap and releasing is a far more ethical and practical way of approaching a raccoon problem. Not only do you not have to use any additional equipment to euthanize it, but you also won’t have a carcass to dispose of.
Place the trap in an area where you see the most activity. Raccoons are omnivores and eat almost anything, but they are often attracted to sweet foods that they can hoard. The very best bait you can use is the humble marshmallow, as well as sweet fruits like watermelon or grapes. When setting a trap, always make sure to anchor it to the ground to prevent it from tipping, and make sure the animal has no other option but to fully enter the trap to get the food. No free meals!
Once you have the raccoon safely confined, you need to observe the regulations placed upon the relocation of wildlife. Relocation across any significant distance runs the risk of separating families, so if you have the animal’s welfare in mind, simply release it a little way from the outside of your property. Following this, if you vigilantly remove all attractants and any other points of interest, you won’t be seeing it again.