How to identify snake droppings

If you believe you are dealing with snakes, one of the best ways to find out if your belief is correct is to look at their poop! But what does snake poop look like?

You may be thinking that snake droppings will look like mice or other rodents that have been eaten, but that is not the case. In fact, snake droppings are actually incredibly similar to droppings you see each and every day; bird droppings.

Birds and snakes only have one opening from which they eliminate solid and liquid waste from their bodies. In both animals, urea appears in this mixture of urine and feces and appears white. This, however, is the only way that bird and snake excrement appears similar.

Inside of the snake feces, you will likely also see fur, teeth, nails, and bones. Because snakes are on the ground, their waste will not look splattered in the way that a bird’s waste does. 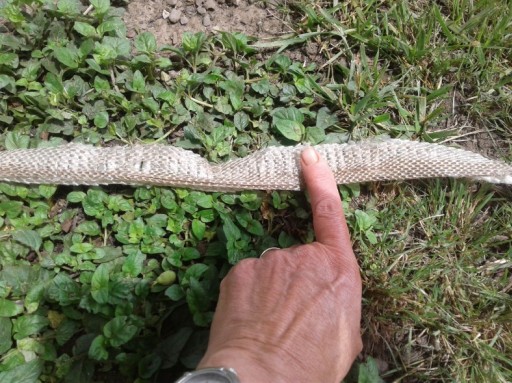 It may also be incredibly difficult for you to locate snake poo! This is due to the fact that snakes will only eliminate solid waste as often as they have meals.

This means that a snake that only eats every few weeks will go just as long between the times that they relieve themselves. If you are seeing frequent piles of excrement around your home, you likely do not have snakes.

You may be thinking “but what if there are many snakes in my home?”. Snakes are actually incredibly isolated creatures. They typically live and hunt alone. That said, if a female snake is ready to breed she often will attract a number of potential mates to her, though this is likely not the case in most homes.

Many experts do not believe you should waste your time attempting to identify snake feces. Even if you are able to determine it came from a snake, you will really only be able to determine how large the animal likely is based on the size of animal parts found within it. Because of the haphazard nature of snakes excreting waste, their feces will vary in appearance every time they go.

Another reason for the lack of structure to a snake’s feces is due to their diet. Snakes are firmly carnivores. They have no plant fiber in their diet so their feces does not have bulk in the same way that a mammals does.