Ways to identify a snake

Some snakes are pretty iconic. Nowadays, the chances are you will be able to identify a black mamba, but there are hundreds of different snake species, many of them harmless, some venomous. The sheer variety of snakes means it is practically impossible to know how to identify each one, but it is important to be able to correctly describe a snake, so an expert can identify it. Identification is key, either in identifying the necessary anti-venom or deciding whether the snake is venomous or not and therefore whether it needs professional help to remove.

Snakes are cold-blooded reptiles, meaning they must manually warm themselves to be able to operate. Therefore, if your backyard has concrete exposed to the sun or damp, warm, sheltered areas, you will likely see your fair share of snakes looking to make your property their home. Most people know the basics of what a snake looks like. Snakes, without fail, are shaped like a rope or a hosepipe, with no legs, and instead rely on their smooth scales to move around. Like all reptiles, snakes lay eggs, and moist damp areas are perfect for nesting. 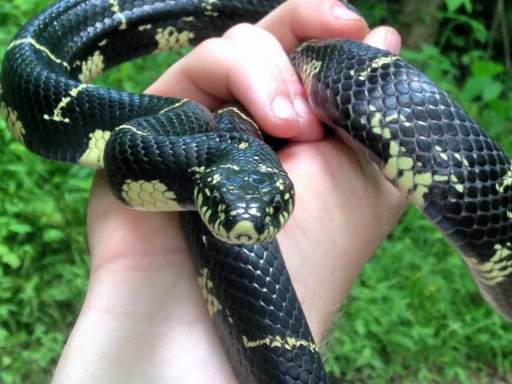 Unlike other reptiles, snakes have no eyelids, meaning they are unable to blink. This is key in differentiating between snakes and legless lizards, which, believe it or not, are actually a thing and are very common.  Legless lizards blink, but snakes do not, so if you can get close enough to be able to study their eyes, you will be able to tell the difference. Depending on whether they are venomous, snakes kill their prey in two different ways. If they are venomous, they will store said venom in their long fangs and will kill their prey with a venomous puncture wound. This is all that the teeth of a snake are used for, as they eat their prey whole rather than chew. Therefore, only venomous snakes usually have long fangs, another way to identify between the two. For non-venomous snakes, they usually kill their prey by coiling their body around the victim and squeezing until the lungs are crushed. Snakes that do this are known as constrictors, due to their ability to constrict the victim. If you begin to find dead rodents in the house or backyard, check how they died. If there is a noticeable puncture wound, it is likely that a venomous snake is nearby, and you should act accordingly. If there is no visible damage, the snake is probably not venomous, and rather a constrictor. However, it is rare to find such rodents lying around, as snakes usually eat them after killing them.

A tell-tale sign of there being a snake nearby is if you come across some discarded snakeskin. In a somewhat grotesque manner, snakes shed their entire skin several times a year, meaning if you happen to come across some skin, you know a snake is close. Unfortunately, all snakeskin appears pale and translucent, so it is impossible to tell anything about the characteristics of the snake from its shed skin, except perhaps its size. However, different species of snake have an eclectic mix of different colors, meaning colors are one of the best ways to identify the snake. Search on the internet the word ‘snake’ and then its color and you will find multiple options. Snakes vary greatly in size, and can range from a few inches to as long as a human being. Once born, their babies must immediately fend for themselves, meaning snake babies look just like adults but a lot smaller.

Perhaps the best way to identify if a snake is venomous or not without an expert is by studying the shape of its eyes. If they are angled and oval-shaped, like a cat, they are likely to belong to a poisonous snake, whereas if the eyes are round, they are likely not to. However, like all things, there are exceptions. The extremely poisonous coral snake has entirely round eyes, so do not take these rules for granted. Instead, use a combination of these factors to get a general idea of the kind of snake you are dealing with before you contact an expert.