Everything You Need to Know About Baby Opossums

North America is home to a number of different species of opossum, the most notable being the Virginia or common opossum. It is a unique species in the United States and Canada, as it is the only pouched mammal, or marsupial, that exists in these countries. Other examples of marsupials around the world include kangaroos and koalas. Their name comes from the Algonquin word “apasum”, which translates to “white animal”. The Algonquin are indigenous inhabitants of North America, most of which live in Quebec.

Opossums are well known throughout North America as scavengers that forage for food throughout the evenings. Opossums are easy to identify – fully-grown adults can be as long as 36 inches from snout to tail and weigh upwards of 15 lbs. Their snouts are long and pointed, and they have grey fur covering their bodies and white fur on their faces. They also have a unique prehensile tail which makes them particularly adept at climbing trees as their tails can be used to grab objects, much like a hand or foot.

Whilst adult opossums can be roughly the size of a cat, their young, called joeys, are significantly smaller. At birth, a joey can be as small as a dime or a bee, making them completely helpless against any predators. Because of this, they will immediately crawl into the mother’s pouch once born, but this is a difficult journey that most opossums do not survive.

As a result, pregnant female opossums called jills, give births to litters containing an average of seven to nine joeys, although in some cases they can give birth to as many as 20 at a time. Mating season for opossums typically starts in winter, so around December to February, with jills giving birth to anywhere between one and three litters throughout the year. 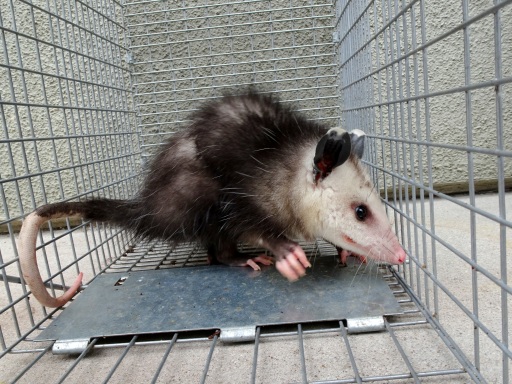 Most infants are born between February and June. Gestation takes up to 13 days before the joeys are born, and they will generally stay in the pouch for around two and a half months. However, not all joeys are guaranteed to survive; each joey needs to attach to a nipple in the pouch to develop further, but the female only has 13 nipples.  Once in the pouch, joeys develop quickly, tripling in size after just one week with their weight increasing by a factor of 10.

This phase of an opossum’s life lasts for around 75 to 85 days, during which they will have opened their eyes. After this, they will start to be weaned off the nipple and forced to venture outside the mother’s pouch. But even then, they stick with their mothers by climbing onto their backs and being carried around for another four to five months.

During this time, should the joey get separated from the mother, they will communicate via sounds. Joeys will emit a sound similar to sneezing to try and help the mother locate them, which will respond with clicking sounds. After sufficient time has elapsed, they will have matured into adults and reached sexual maturity, and will then leave their mothers into the wild on their own.

Once they have achieved independence, opossums from the same litter will not stay together. This is because unlike many species of mammals, opossums are solitary creatures. As a consequence, adult opossums will not den or nest with others, which can be especially difficult for them during the colder months. 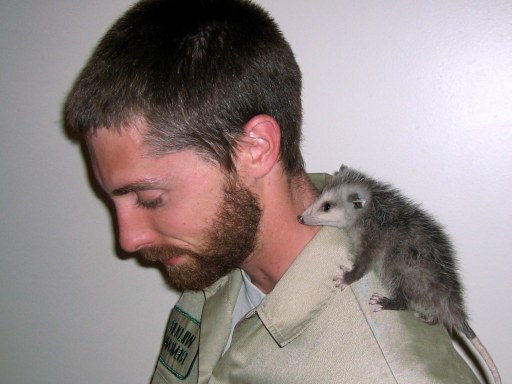 This is due to the fact that they do not hibernate, instead remaining active throughout the winter as they are unable to store fat in the same manner as other mammals. Although adult opossums are not particularly equipped to fight attackers, they will start to develop a number of tactics to evade predators once they reach maturity.  This includes their infamous ability to “play possum”, where they collapse into a death-like state. This makes their bodies go rigid and expel a scent that makes them smell like they have been dead for some time, which causes their predator to lose interest.