Symptoms of a sick rat

This small guide shows the signs that rats can give, whether domesticated or not if they’re sick. However, it’ll be easier to notice a domesticated rat if they’re ill because domestication makes them more accommodated to human behaviour. Firstly, feeding behaviours. They will rapidly decline in weight, as they stop eating, another symptom being the rapid reduction in their appetites. Along with this, rats can stop grooming themselves if they’re ill, and their teeth will grow longer as they stop wearing them down.

Other physical signs can be a big giveaway to a rat being ill. They can’t tell you, so you need to be vigilant to signs that they give off. Some of these can be their breathing and heart-rate are irregular or unusually fast. They may sneeze constantly, or have diarrhoea-like waste. Restless or excessive sleeping can both signal illness, so it can be difficult to notice, but if the animal takes preference to one of them, there could be something wrong. 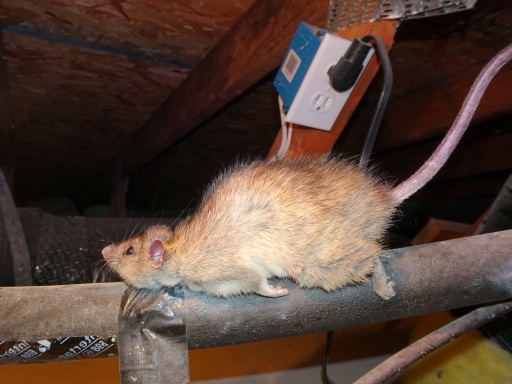 Rats can be excessively exhausted when ill, and sometimes seem to crouch for a while. They may sneeze constantly, which is a more helpful indicator of their illness.

Some other noticeable signs, which should really tell you that they’re ill, are more physical attributes.

Their noses and eyes can turn a deep red, as a sign of extreme irritation, and their eyes may not be lining up, they could be squinting constantly, and so forth. Their eyes and nose may even have a discharge, which may resemble mucus. And lastly, they may be hobbling or refusing to move, which is an indicator of broken bones in the animal.

If any of these symptoms have been seen on the rodent, it isn’t ideal that you come into physical contact with the animal, or try to move or deal with the animal yourself. You should, instead, report it to an animal rehabilitation centre, or a wildlife control centre as soon as possible. They will have a better idea of what you should do, or whether they should come to you to sort the issue. Rats can also fall ill, whether it be a bacterial infection or a sustained injury. They may hold some deep wounds, and although it’s sad not to do anything yourself, it’s for your own safety. Rats can also have bigger issues like respiratory disorders triggered by a number of different causes, or eye infections like Porphyrin, which is characterized by the redness in the eyes mentioned earlier but is a reddish discharge. Rats can also form cataracts on the eyes.

All of these issues with rats are complicated and delicate issues, which is inherent from the size of the animal. Because of these, seeking other expert help is the best cause when any symptoms listed here are found. Medical attention can alleviate the rodent’s suffering, so the sooner it is done, the better for the rat.