What You Need to Trap a Squirrel

Even though squirrels might look cute and harmless, they can wreak major havoc on your property. You can utilize a live squirrel trap to get rid of squirrels in the most humane manner. The live cage trap is more widely preferred. While there are many options available, they all operate in a similar manner. Cage traps are usually made using heavy-gauge steel wire and constructed in a box-shaped rectangle. You’ll also find some made from heavy-duty plastic. When it comes to trapping squirrels, the ideal cages are five to seven inches’ square and 17 to 18 inches long. Choose your trap according to the size of the squirrel you look to catch.

You should set up your trap on a flat surface along the path the squirrel frequents. In case you aren’t sure where that path lies, a great place to start is at the base of a tree or along a wall near your damaged area.

Ideal locations to set up your trap include: 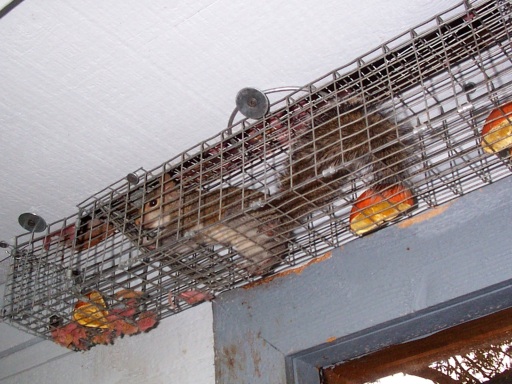 Unlike a majority of animals, squirrels prefer to be out in the open instead of close to cover. Thus, you should set up your trap away from low-lying shrubs and bushes.

Choose a bait the squirrels can’t steal: Directly apply peanut butter onto the trigger plate. If you are using a solid bait, ensure that it is bigger than the trap’s mesh openings, in-the-shell peanuts are ideal for this. The bait should be positioned in such a way that it forces the squirrel to engage the trigger.
Leaving an animal trapped for extended periods of time is inhumane as the animal can quickly get hungry, thirsty, and also anxious. Thus, it is important that you check on your trap regularly to ensure that the squirrel isn’t trapped longer than it has to be.
As you are looking to trap and remove the squirrels in the most humane way possible, you should avoid using jaw traps. There are various compelling reasons as to why you shouldn’t use jaw traps. For starters, they are quite challenging to set up and you can end up injuring yourself. Secondly, they aren’t humane. When the animal presses on the trigger plate, the spring-loaded jaws shut around the animal.
The trap is normally triggered when the animal tries to get to the bait that has been placed on the plate. The jaws snap shut killing the animal.

It is important to ensure that once you release the squirrel from the live cage trap, you disinfect the trap to avoid the spread of disease. After you have removed the squirrel, you can ensure that they stay out by following the preventative steps provided below:

Minimize attractants: remove garbage; clean up fallen nuts, berries, birdseed, and so on; replace your current birdseed with another type that squirrels hate.

Restrict accessibility: ensure that all tree branches within 10 feet of your home are trimmed.