What Are the Different Symptoms of a Sick Bat

It may be hard to tell a sick bat from a healthy one. Keeping a safe distance, there are a few telltale signs that a bat is sick. You don’t have to be a veterinarian or a bat expert to know when it’s sick. You know that bats fly and you know they are nocturnal. That’s all the information you need!

Symptoms of a sick back include flying during the daytime, erratic flight patterns, inability to fly, rabid behavior, lethargy, and a lack of appetite. There are a couple of other signs like a white nose or glazed eyes, but it’s not recommended that you get close enough to see either of them.

A Sick Bat in Daylight

The first symptom of a sick bat you’re likely to see is if it’s active during daylight hours. Bats are nocturnal and are rarely seen during the day. Of course, if a bat is pushed out of its roost then you can spot it during the day, but if it’s alone then it’s probably sick. 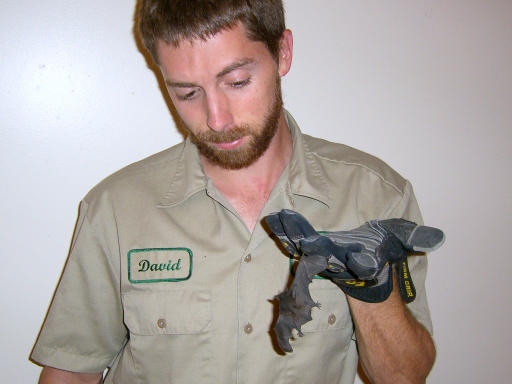 You may not know what a bat’s flight pattern or behavior is in the first place. A sick bat will appear aimless, flying in circles or in an erratic pattern. Some of them even struggle to fly at all, remaining on the ground.

If a bat is flying strangely above you, it’s best to turn around and walk out of its general area. A sick bat is unpredictable, so avoidance is better than interaction. You should also call animal control to keep it from spreading whatever it’s sick with.

If you see a bat on the ground, don’t touch it. Leave it alone and call animal control. If a bat is on the ground (especially in daylight), then it most likely was kicked out of its roost. Healthy bats in the roost will kick out sick ones to avoid contamination.

Bats are generally not known to be aggressive towards humans. They will only attack something larger than themselves if they are threatened, otherwise, aggression is reserved for hunting insects. If a bat is aggressive towards you, you should leave immediately. It’s likely a sign of rabies, meaning it is a sick bat and can seriously harm you. Leave it alone and call animal control to take care of it.

Bats are small, nocturnal creatures that get a bad rap through fear and urban legends. They would only harm a fly when healthy, but a sick bat is dangerous. Keep these symptoms of sick bats in mind to stay safe, and call animal control if you ever run into one. It’s important to keep the spread of disease as low as possible.